Yowza! This Hot Chocolate Pie  Obsession {Frozen or Icebox Style} is downright delicious!  Hot chocolate is considered a comfort food and is widely consumed in many parts of the world. Thank God!

Could you imagine not  ever having the pleasure of drinking hot chocolate in this lifetime?  I don't even want to think about it!  *Shudder the thought!" So glad the Aztecs discovered hot chocolate! 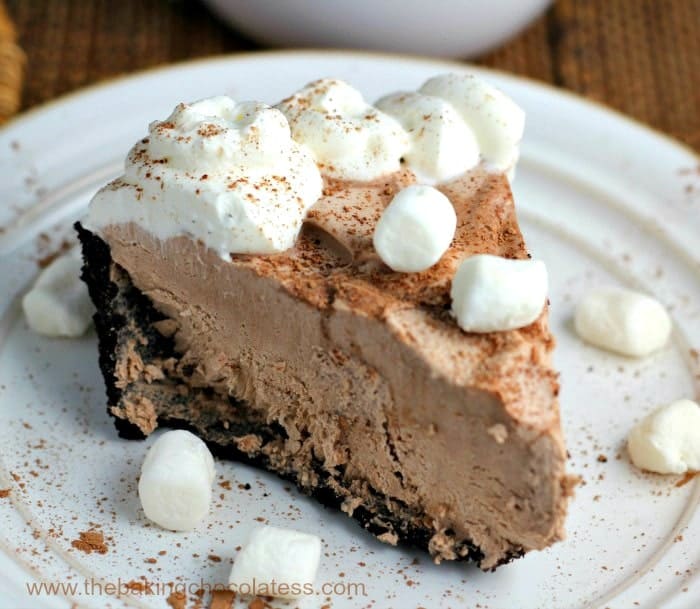 The first chocolate beverage is believed to have been created by the Aztecs around 2,000 years ago and it became a daily ritual to drink hot chocolate and a huge part of their culture.  Aztec Emperor Montezuma was so obsessed with hot chocolate, that he would drink up to 50 golden goblets of hot chocolate, dyed red and spiced up with chili peppers.

Each time he drank from a golden goblet, he would then toss it over the balcony of his palace which overlooked one of the many lakes surrounding Tenochtitlan. He would repeat the process over and over, throughout the years of his rule. He never drank from the same goblet twice.

Decades after the Aztec empire had been destroyed, these golden relics were found and are still being found by divers. Cha-Ching! 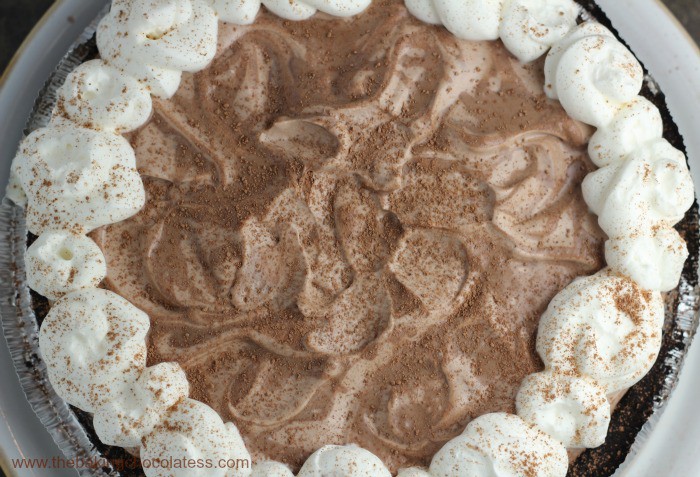 The recipe was sent back to Spain and, with the addition of some sweetener (honey or sugar), and the newly discovered vanilla plus some cinnamon and black pepper, and it became a national obsession. In fact, the recipe was kept an official national secret for nearly a hundred years. People were so crazy about chocolate that the Catholic Church had to investigate whether or not it was sinful to overindulge in the drink, and if it was acceptable to partake in the drink during Lent and fasting.  Seriously?  Reminds me of the movie 'Chocolat'!

When chocolate was introduced to France in the 17th century, it was used "to fight against fits of anger and bad moods.” I'm thinking this is where chocolate for PMS comfort was created.  😆

Modern research has discovered that chocolate reduces levels of stress hormones in the bodies of people feeling highly freaked or stressed out. I can attest. When I get even a little bit stressed, the first thing I reach for is chocolate!  I need it, I want it, it calms me.  It's my sanctuary. My happy place. 🙂 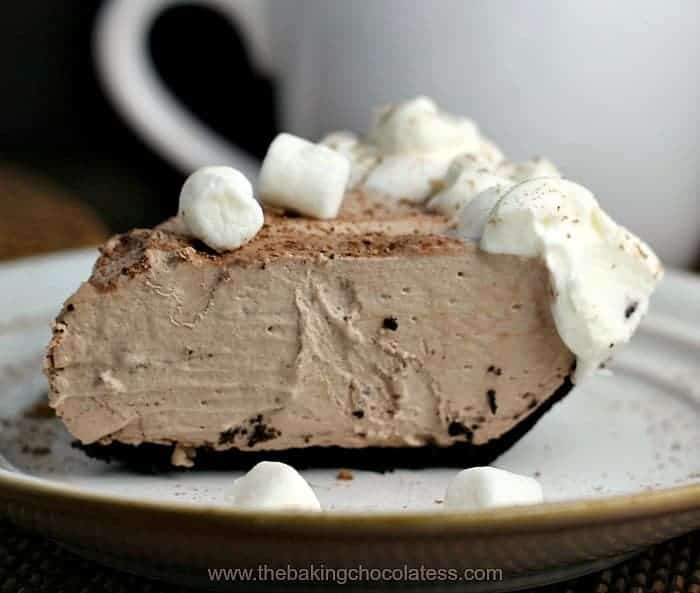 If you're loving the chocolate pie theme, you would love this Dark Chocolate Silk Pie! It’s Delectable! and this Whipped Chocolate Cream Pie! {Bringin’ Sexy Back!}

Here's some more Pie LOVE! 12 Delectable Pies for the Holidays and 21 Dreamy Cream Pies To Go Ga-Ga Over!

So, am I obsessed?  "Chocolate you have bewitched me, body and soul. I wish to never be parted from you from this day on. Ever."  Now, here's the scoop on this soothing Hot Chocolate Pie Obsession {Frozen or Icebox Style}.  It's amazing either way!! If you freaking love pie...like Cartman...Piiiiiaaaaeeeeee!

So, are you ready for some Hot Chocolate Pie Obsession? Here's the recipe!

Kim Lange
You'll be obsessed with this smooth Hot Chocolate Obsession delight, once you indulge in a bite, or two or three! Warning...It's sinfully irresistibly chocolate deliciousness!
No ratings yet
Print Recipe Pin Recipe
Calories