Need a delicious casserole to feed a crowd at breakfast or brunch?  This easy Overnight Cinnamon French Toast Bake is so easy to pull together, you'll wonder why you haven't made it before!  It's the ultimate soft custard-like French toast with a super crunchy cinnamon-sugar on top! Just add some maple syrup for the finishing touches!

Watch out, it's addictively yummy!  You'll want it every weekend going forward and it's perfect for serving over the holidays for sure! 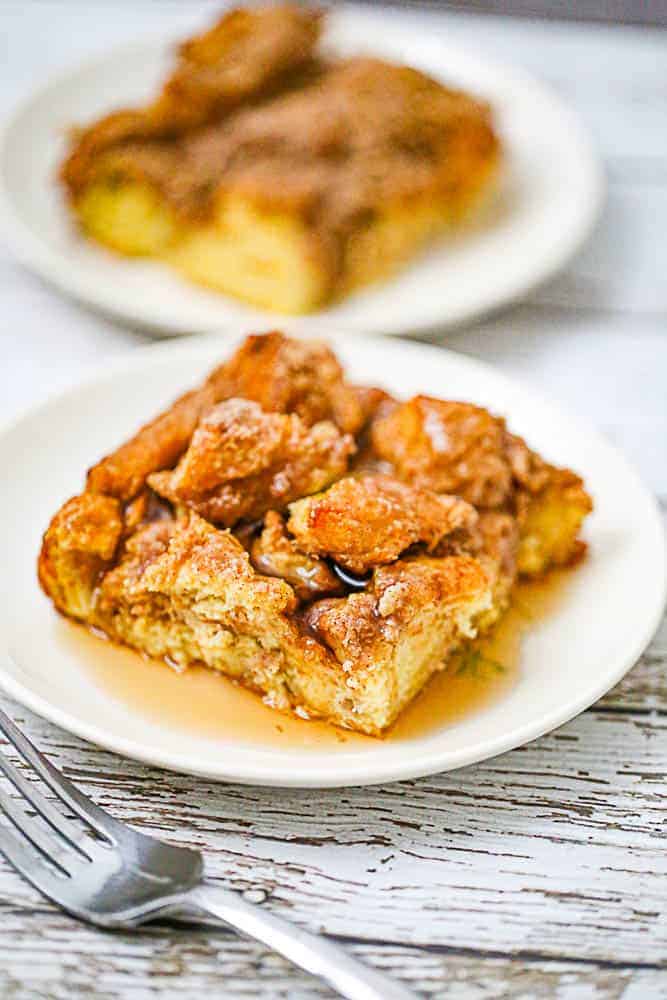 Here are a few more ideas you can incorporate into your French toast recipe for some change-up fun!

Add a few tablespoons of RumChata to give it an extra kick!  It's a lovely cream liqueur flavored with cinnamon and vanilla, perfect for this dessert French toast bake!

Use any bread you like!  We used French, but you could use sourdough, cinnamon swirl bread, challah, loaf bread of any kind or even some sandwich buns.

Swap in any non-dairy milk instead of the dairy milk, like almond milk or coconut milk.

Use your favorite doughnuts or leftover cake instead of bread to take it to the next level!  Seriously insane!

Add some crispy, crumbled bacon or sausage and add it to the mix or add it on top or both.

Add some of your favorite fruit such as strawberries, blueberries or raspberries as a fresh fruit on top or add it to the mix as well. 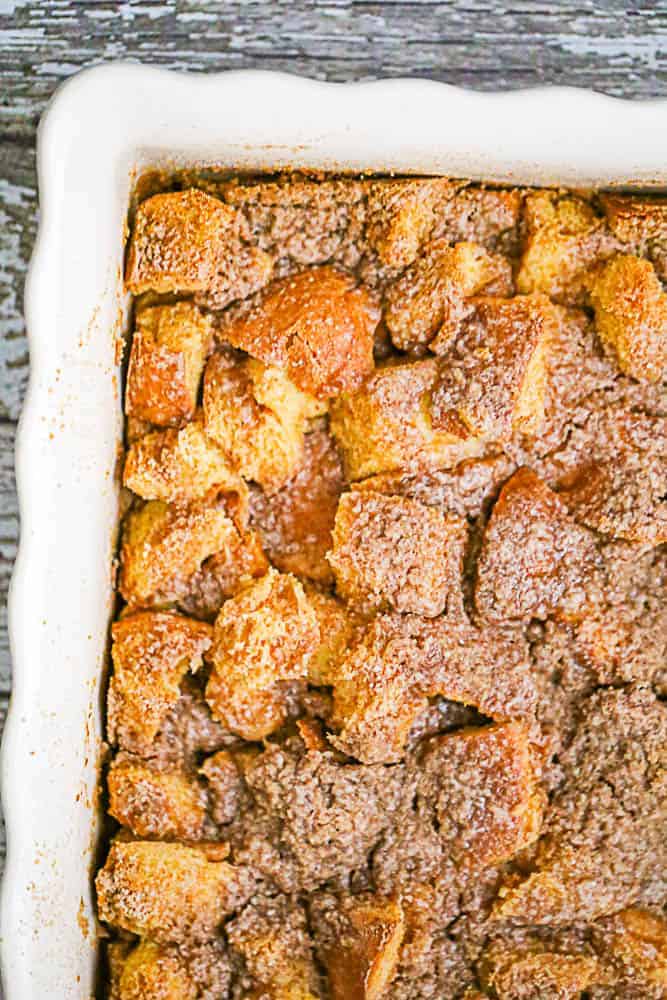 Prep everything in 1o minutes or less and refrigerate overnight.

Then assemble everything together in 2 minutes and just pop it in the oven in the morning. The fam will go crazy over this and you'll be happy you made it!  Plus, the aroma is intoxicating! 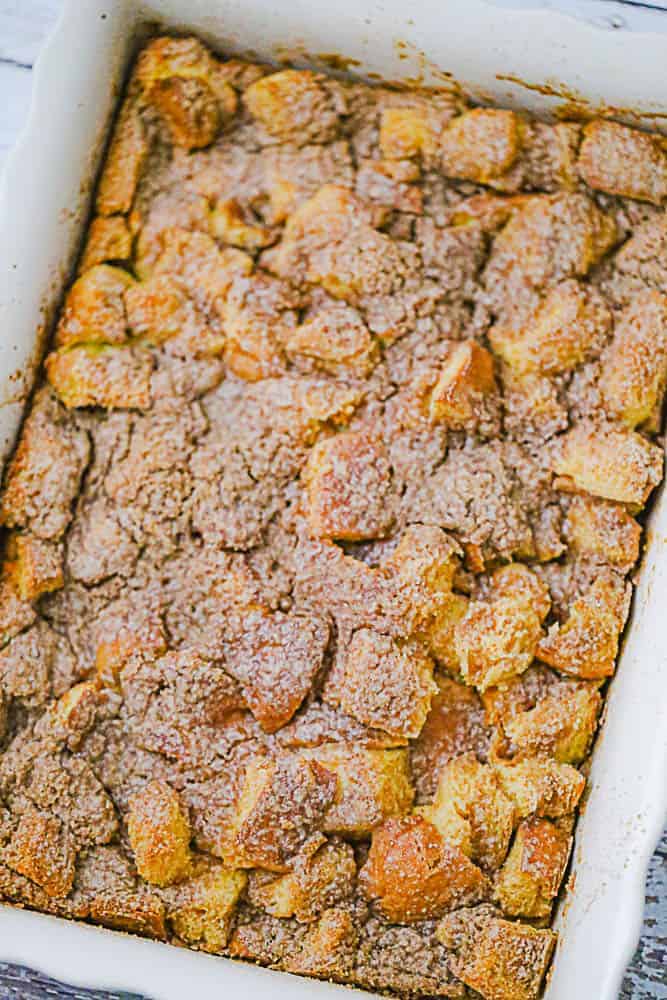 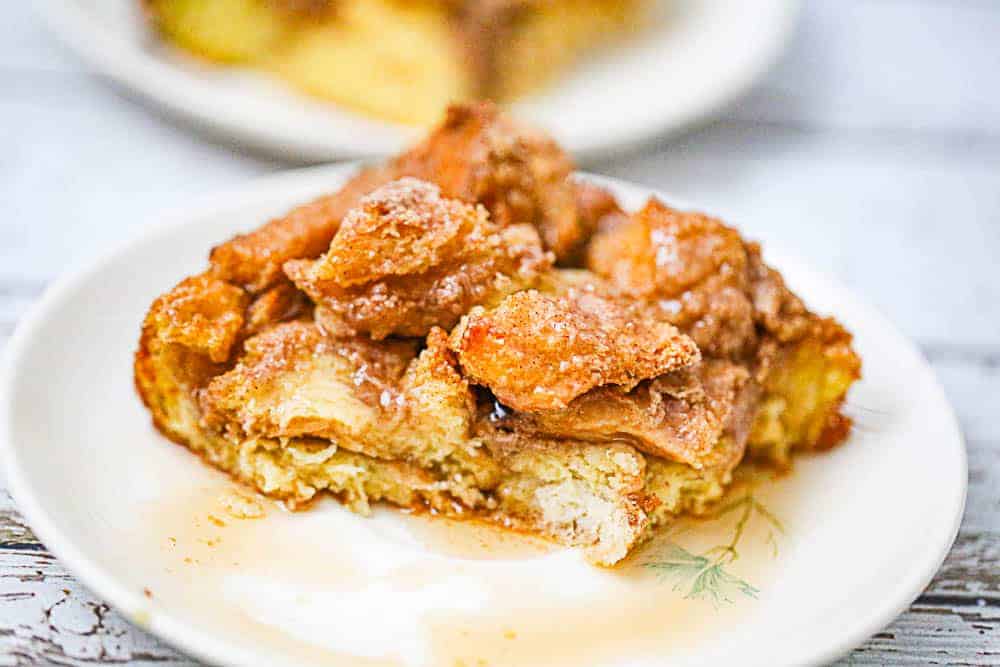 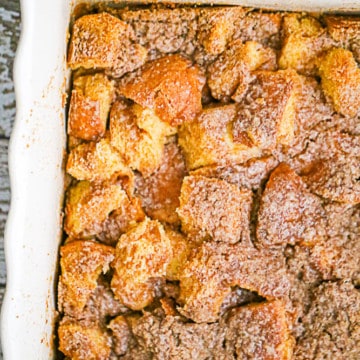 Kim Lange
Need a delicious casserole to feed a crowd at breakfast or brunch?  This easy Overnight Cinnamon French Toast Bake is so easy to pull together you’ll want it every weekend and the holidays for sure!  It's the ultimate soft custard-like French toast with a super crunchy cinnamon-sugar on top! Just add some maple syrup for the finishing touches!
4.6 from 5 votes
Print Recipe Pin Recipe
Prep Time 20 mins
Cook Time 45 mins
Course Breakfast, Brunch
Servings 8 Servings
Calories

HOW TO FREEZE: Wrap dish with plastic wrap then foil. It can keep for up to 2 months in the freezer. When you’re ready to eat thaw overnight in the fridge, remove all the wrapping and bake. If it been prebaked cook at 350 degree F for 20 minutes. If it has not been pre-baked, cook according to recipe directions
Keyword breakfast, breakfast bake, brunch, cinnamon, French toast
Tried this recipe?Let us know how it was!