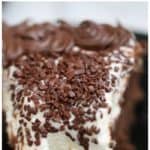 This Awesome Chocolate Brownie Cheesecake Dessert is one chocolatey decadent dessert you won't be able to resist!  Wait...Why would you even want to miss out on this? It's brownie cheesecake heaven! 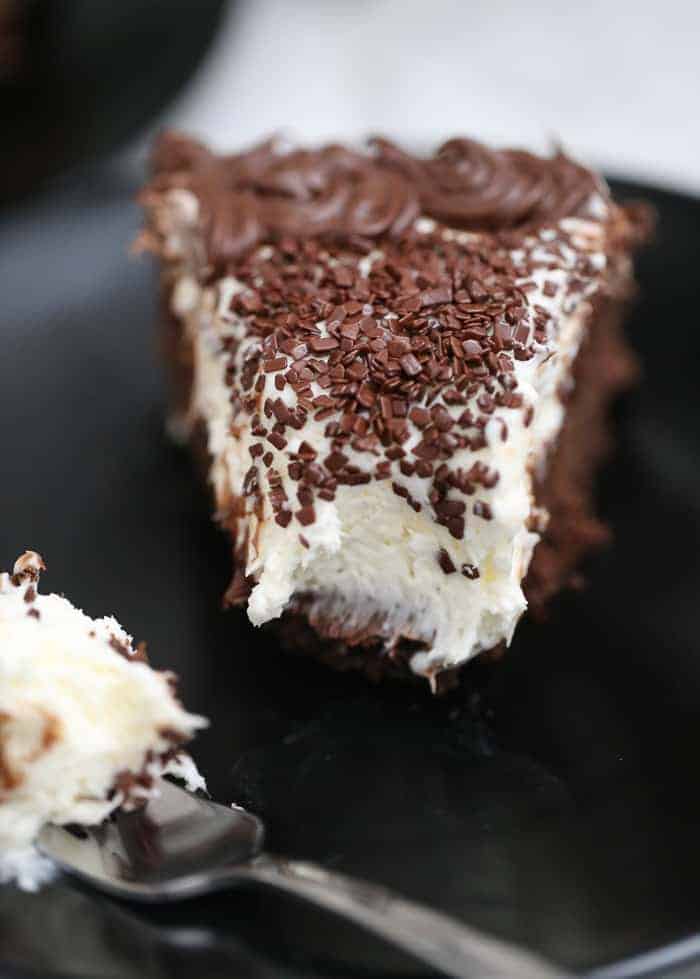 With tempting layers of fudgy brownie, chocolate fudge frosting and creamy cheesecake, you can see why this cake is so drool and swoon-worthy .  Don't you need this already? 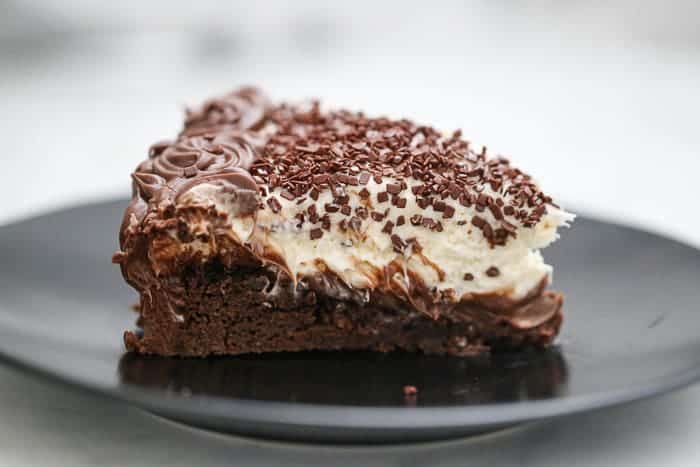 The good news is, it can be done!  Woo-hooo!  It does take a little preparation, but it's not as bad as you probably would think and this is a dessert that is lovely for making a couple of days ahead of time before serving. 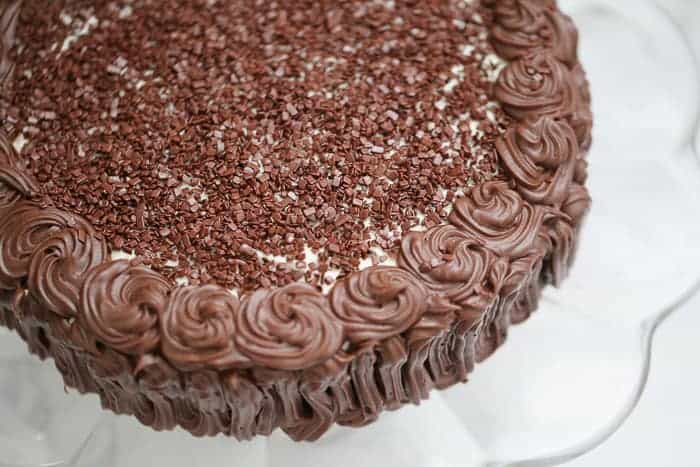 The cheesecake portion is no bake, so you won't have to bake that layer, so basically, all you do is make and bake the brownie base in an 8" springform pan lined with parchment paper on the bottom and sides of the pan for best results.

After it's cooled, loosen the brownie from the pan by releasing the latch, but place back into the pan, so you continue with the other layers.

Frost the top of the brownie with a thick layer of chocolate frosting. The remainder will be used for the sides and border of the cake and just so you know, you may not use it all.  You will need to buy 2 tubs of your favorite rich and creamy chocolate frosting

You could also use Pillsbury's Chocolate Frosting

pastry bags, if you want to eliminate using a pastry bag and filling it. But for filling and using a star tip, here is a tutorial on how to use a piping bag, check out The Kitchn.  It's up to you how decorative you want to make the sides and top of the cake.  You could even just spread it on with an offset spatula

Place in fridge for up to 5 hours or overnight. 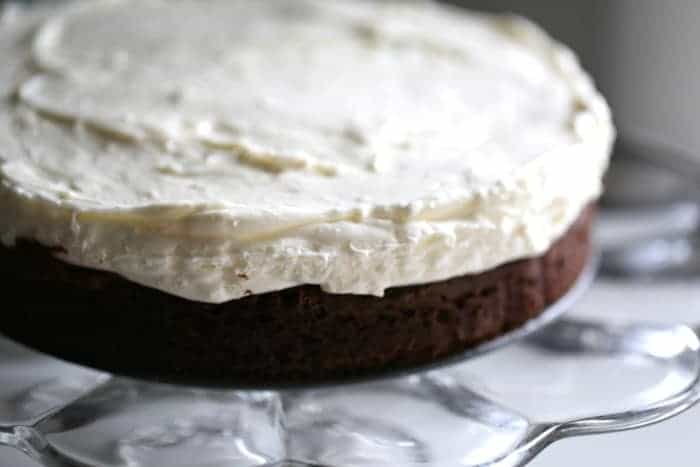 Dab some frosting on top of cake plate and place brownie cheesecake on top to keep it from sliding.

Pipe frosting on sides of the cake by zig-zagging the frosting up and down the sides the cake.

Place back in fridge until ready to serve.  Super yummy! 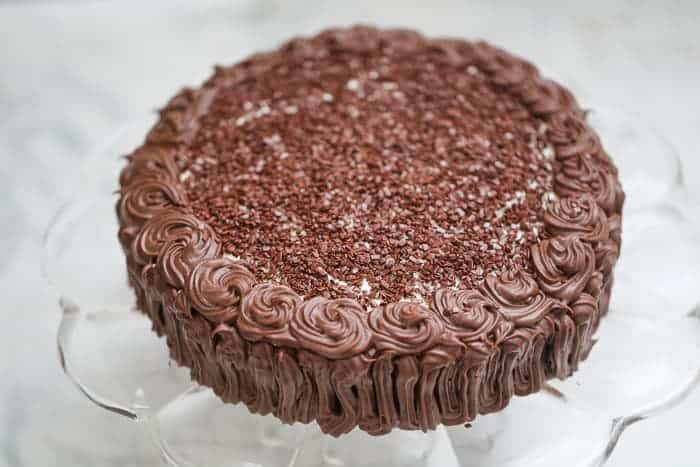 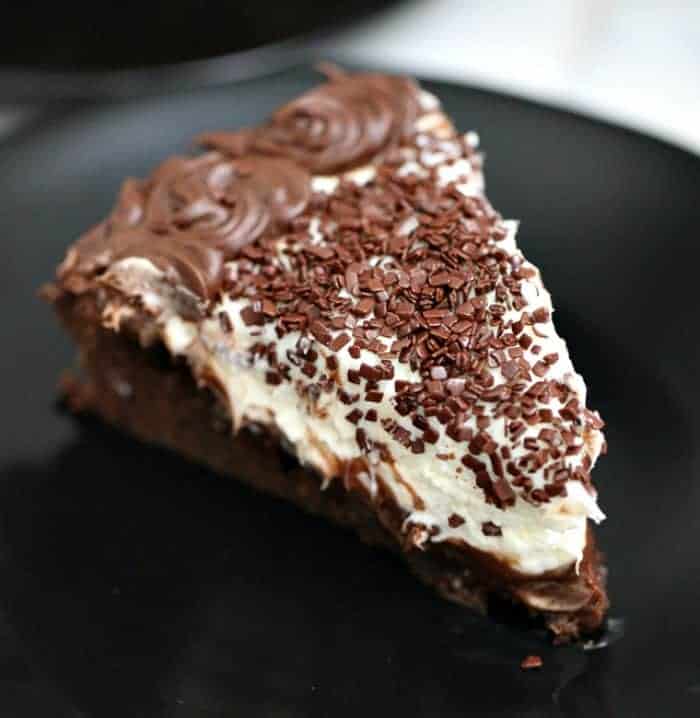 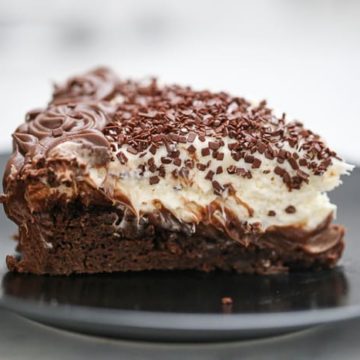 Kim Lange
With tempting layers of fudgy brownie, chocolate fudge frosting and creamy cheesecake, you can see why this cake is so drool and swoon-worthy .  Don’t you need this already?

Other option - If you don’t want to frost cake, you can drizzle with hot fudge and serve. *Brownies, you can use a brownie mix, prepared as directed on package using ingredients as called out.  *For shortcut Cream cheese filling using Cool whip - replace whipping cream with 1 ½ cups Cool Whip and leave out powdered sugar and mix into cream cheese mixture.
Keyword brownie pie, brownies, cheesecake, dessert
Tried this recipe?Let us know how it was!
« Marvelous Chocolate Chip Party Cookie Cake
Easy Upgrade Cake Mix Cookies »
9.4K shares