Who's ready for a frightfully good Halloween party?

These Halloween Skull Cupcakes will make everything sweeter when you want festive divine tasty treats to serve your little monsters!  Let's Party! 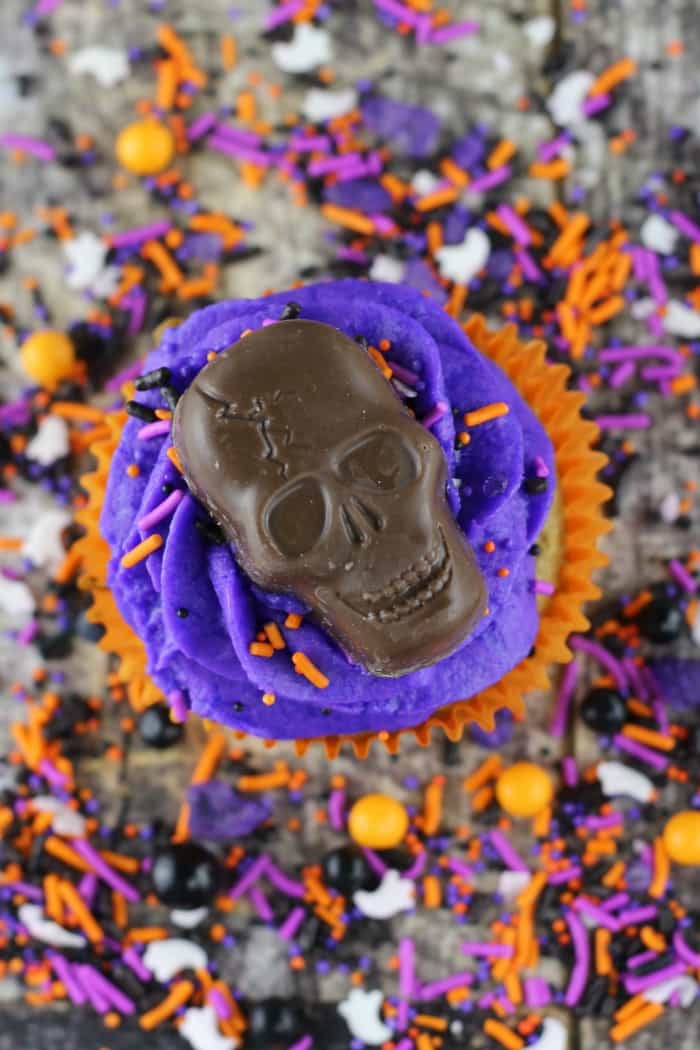 Short on time?  Here's what you do!  Go buy some Nestlé's Butterfinger Peanut Butter Cup Skulls!  Actually buy 2 or 3 bags.  You'll want to hide them from everyone, until you make the cupcakes, at least! 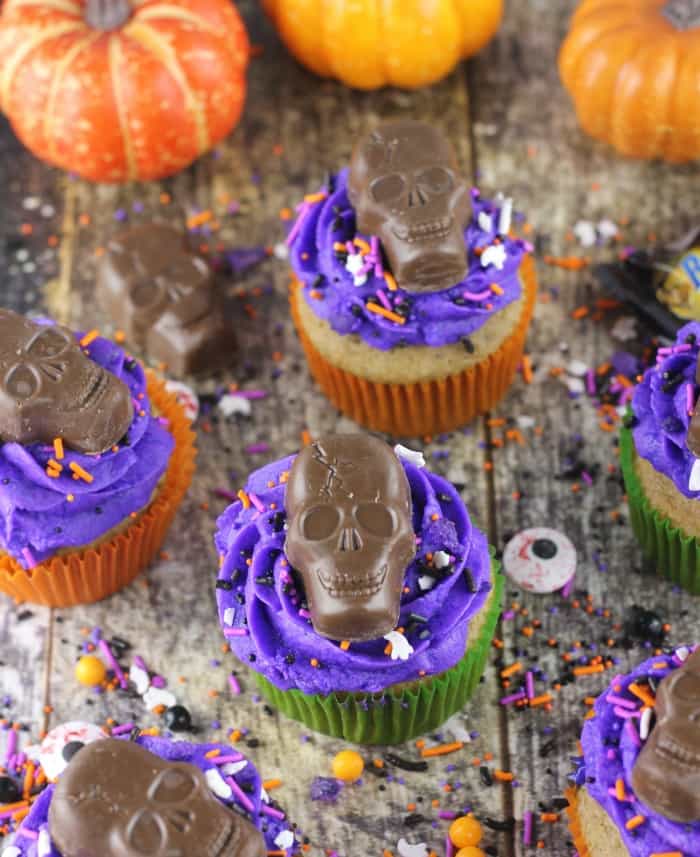 The hubs found them in my chocolate stash tucked away, BUT, obviously not tucked away good enough.  Ummseriously?  Does he not know that I have a purpose for every chocolate purchase that I make?

How does he not know this?  After many, many years of observing my undying love for chocolate, he dares to trespass?  He knows how possessive ugly I get when anyone eats my chocolate without my approval? UGH! 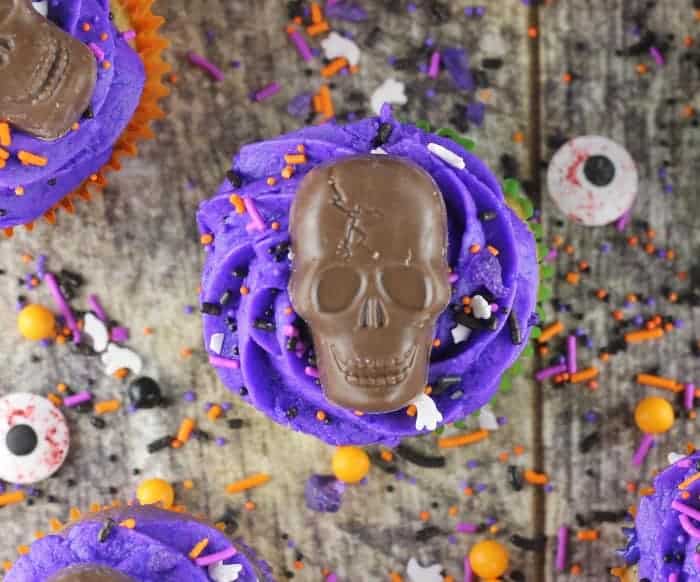 Anyways, I was left with a half bag of Skulls

...  I guess I'm going to have to put a lock on my drawer of chocolates. 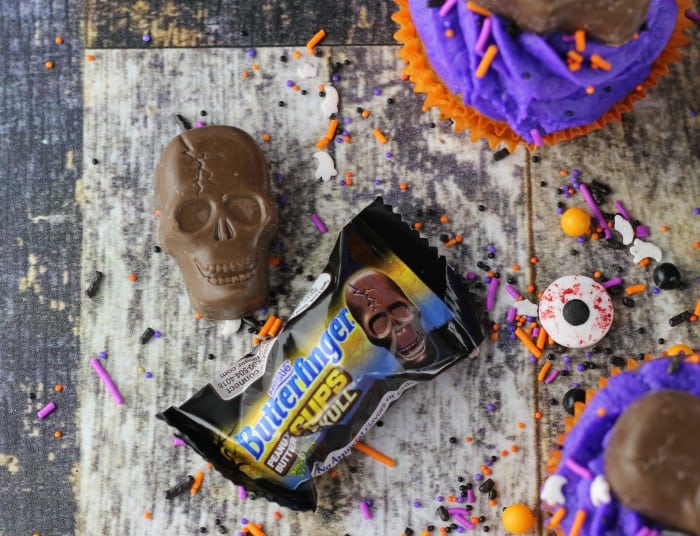 And just when I thought it was safe for sprinkles, those went MIA as well!

I tore the kitchen up trying to find those and they were finally discovered on the kitchen table underneath some of his guitar parts.  I was beginning to think these Halloween Skull cupcakes were not going to be made.  Everything was starting to feel a little eerie! 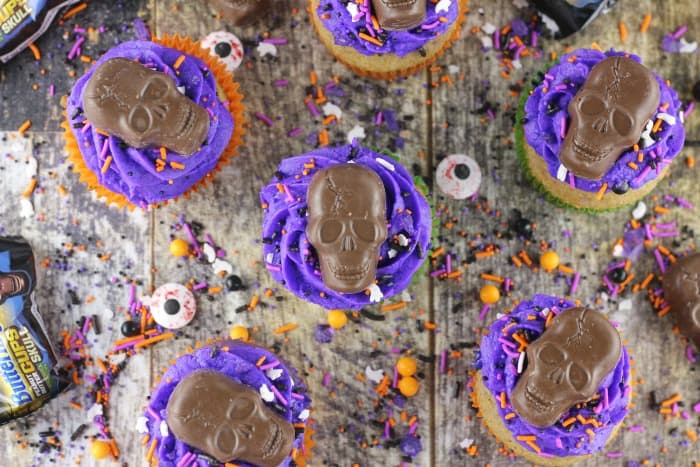 So, it was time.  Make the cupcakes!  You can make these the easy route.  Use your favorite cake mix and make cupcakes, whip up your favorite color of Halloween frosting by adding in some gel

, add some decorative sprinkles and a Skull on top.  That's it.  BAM! 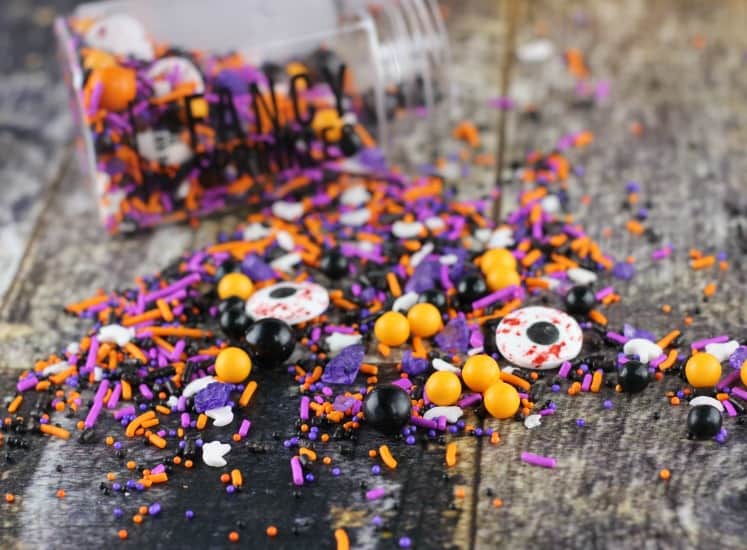 How easy is that?  I love these Hocus Pocus Sprinkles

from Fancy Sprinkles as well.  You can add a lot or just a few to your liking.  They are totally spooky cute!

OHHH!  These Pinnacle Orange Creamsicle Jell-O Shots are a fun way to get the party started for the adults!  For lots of other Halloween Party Ideas, go check out the 20 Spooktacular Halloween Desserts Round-Up! 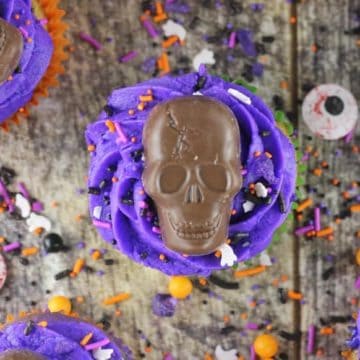